Born and raised in Phoenix AZ he is the youngest of six. After graduation from high school, he landed a stewarding job in the Historic Arizona Biltmore Resort and fell in love with hospitality. From stewarding he was promoted to food runner at the Frank & Albert’s Restaurant and worked in this position for two years. His next career move was to become a food server and immerse himself in the

customer service field. During this time, he learned all the traits of the industry, not only how to be a good server but a great server by enhancing every guest’s experience. A few more years passed, and Emmedel was promoted to lead server and trainer for all new hires, while working in this role he became interested in a food and beverage management position and began to strive to get his foot in the door; a year later he landed the restaurant supervisor role and got his first taste in management. During the pandemic he was offered an assistant manager position at Las Sendas Grille from the country club in Mesa AZ and learned to manage and operate a restaurant. The opportunity presented itself for Emmedel to join The Country Club at DC Ranch family as the Ranch House Manager and hasn’t looked back. He is very happy to be here and is excited to share his knowledge with his team. 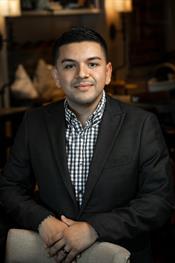